Integrity and the Problem with Binary Thinking

My latest post on Law For Change - Legal Resources ("LawforChange.org")


When I was younger, my father used the oft-cited Winston Churchill quote that I paraphrase here:

“If you’re not liberal when you are young, you have no heart.

If you’re not conservative when you are older, you have no brains.”

That line still begs a chuckle today. (And I learned a long time ago that it’s no laugh-line unless it includes some truth.)
But honestly, as I’ve gotten older, I’ve come to realize that this is really a great lie.
Why?
Because it allows us to draw the line between “smart” and “stupid,” and between “good” and “bad” between us, rather than through us. In fact, if I can put you on one side of the line or the other, then it helps me avoid my responsibility of realizing that I am sometimes “smart” and sometimes “stupid,” sometimes “good” and sometimes “bad.”
Basically, Churchill’s line lacks integrity. It’s cute, yes. But what is really does is make me think of youthful idealism as though it were stupidity, and older practicality, as if it were evil, and it allows me to ignore the older idealists, and the selfishness often present in youth.
The same is true today of the pervasive idea that you can either “do good” or you can “do well.” The idea simply lacks integrity.
Put another way, when doing well and doing good are separated, in a person, an organization or a corporation, the completeness or “whole” does not exist -- there is a lack of integrity.
Let’s take a deeper dive into what I mean.
Take our U.S. tax policy, for example, that rewards entities for “doing good” with deductions and tax exemptions. Corporate philanthropy (up to 10% of profits), expenditures on research and development, and employee health care, among others, all receive tax deductions as a result of public policy decisions designed to encourage that behavior.
Even further, so-called “non-profits” represent another corporate form, this time for maximizing “doing good,” rather than creating wealth. Thus, for-profit corporations “do well” (i.e., create private wealth) and non-profits “do good” (i.e., create social benefit). This binary thinking (doing good vs. doing well) produces two systems that can be represented on an x-axis/y-axis as follows: 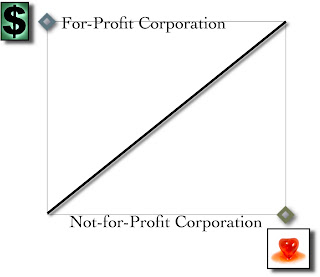 where the $ sign represents the highest point on the axis for creating private wealth (i.e., doing well), and the ♥ represents the highest point on axis for creating a social good (i.e., doing good).
This figure shows that a classic “for-profit” entity (typically a subchapter C corporation or an limited liability company) scores high on the “doing well” axis, but near the bottom of “doing good,” whereas a non-profit or tax exempt corporation scores the opposite (i.e., high on “doing good”, but near the bottom for “doing well”).
Of course, that last statement is overly broad. Corporations have long undertaken corporate philanthropy, supporting the arts, education and contributing to programs to alleviate the conditions of poverty. But corporate philanthropy does not represent the universe of ways in which corporations have a positive social impact. Companies employ people, produce efficiencies, improve lives, help avoid poverty and starvation, not to mention creating wealth (not only for executives on the top of a corporation, but also workers holding equity in IRA’s, mutual funds and pension funds). Yet even further than all this, corporate social responsibility programs are entering their third decade of wide-spread adoption, with more and more measurable impact on communities, extreme poverty, and reducing negative stress on the planet and the environment.
On the other side, daily press stories profile social entrepreneurs seeking to employ business models on behalf of non-profit corporations. Earned income strategies, corporate efficiency, market analyses have permeated nearly every major non-profit, moving them up the scale of earning more. Non-profit donors are asking tougher and tougher questions about ways to achieve scale, ways to measure impact, and ways to ensure that investments result in leverage.
Interestingly, this movement of for-profits toward doing good (in addition to doing well for their shareholders) and the movement of non-profits toward doing well (in addition to doing good) is not being orchestrated. Rather, in some very real sense, the behavior of each organizational type has been, and continues to be, to move towards the fully integrated spot – the spot of integrity, or wholeness and completeness -- in the upper right-hand corner of the earlier diagram. 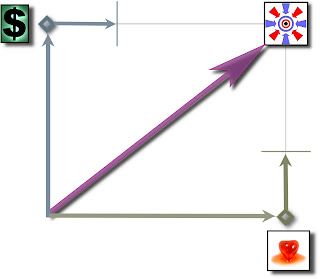 1 The term “for-benefit corporation” is used throughout to describe the type of entity distinct from the typical “for-profit” and “non-profit” models of a corporation. These are entities are built to optimize private wealth innurement (doing well) and social benefit (doing good). “For-Benefit Corporation” is a trademarked term of the Fourth Sector Network, which ascribes a different meaning.

*Todd is a partner at the law firm of Jones Day, where he founded their Silicon Valley Office and runs their Renewable Energy and Sustainability Practice. The views expressed in this column are solely Todd’s personal views, not the views of Jones Day or its clients, and the information provided as to his affiliation with Jones Day is solely for purposes of identification and may not and should not be construed to imply endorsement or even support by Jones Day of the views expressed herein.
© R. Todd Johnson, 2010. The thoughts, ideas and words expressed in this column are the property of R. Todd Johnson and may not be otherwise used or reprinted without express permission from Todd.
Posted by Todd at 11:22 PM